(Washington, D.C.) Today, February 26, 2017, the Government of Sudan released Mr. Petr Jasek, a personal friend of Hardwired’s founder, Tina Ramirez. Mr. Jasek, a Czech citizen, had been sentenced to life imprisonment on charges of espionage on January 29, 2017. Mr. Jasek was visiting Sudan in December 2015 to provide humanitarian aid to needy Sudanese. He was taken into custody as he was leaving the country and later charged with various unsubstantiated crimes.

The Bridges Team traveled to Sudan to speak at the Horn of Africa Peace Conference and two colleges. In addition and at the request of U.S. based NGO Hardwired﻿﻿ and its founder Tina Ramirez, Bridges was asked to help secure the release of Petr Jasek.

﻿Petr Jasek, a Christian film maker from the Czech Republic had recently been given life in prison. The Sudanese government in an act of mercy and good faith ordered the release of Petr who is now back home safely.

Petr was released largely because of a long standing record of "friendship diplomacy" established by Bridges & its partners and the direct assistance of Sudan's former Foreign Minister, Ali Karti, a Bridges prayer partner for over 10 years. 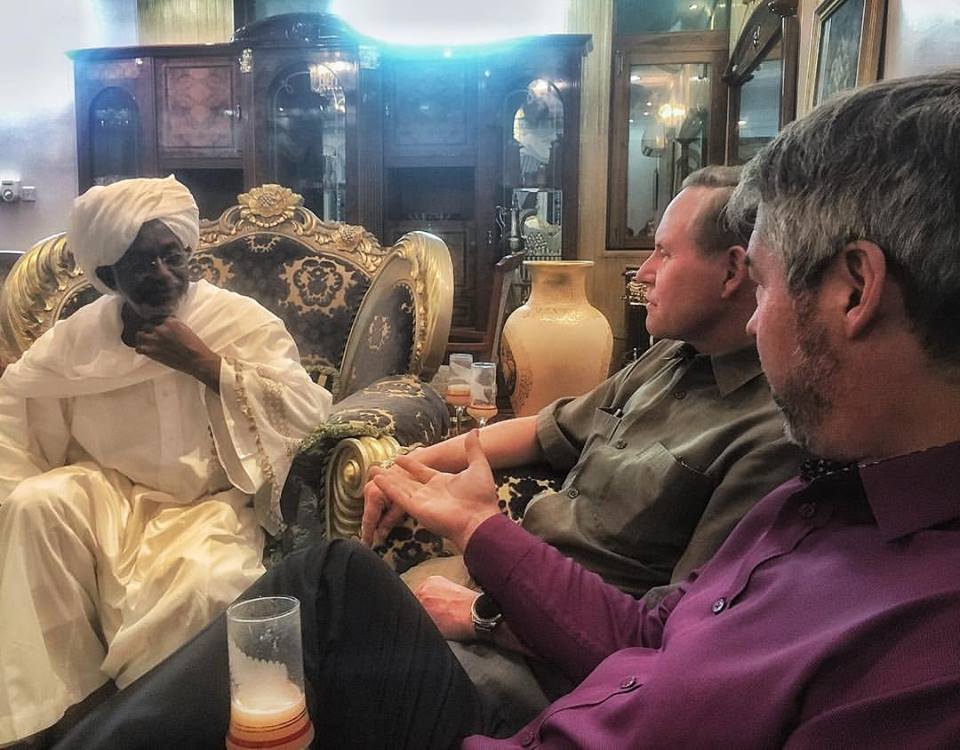 Traveling with Mark Siljander to Sudan, I was given an extraordinary inside look into the world of Jesus-based relational diplomacy that Mark advocates for, and I saw up close and personal not only that it works, but how it works.

"Mr. Jasek’s release comes after Hardwired’s 15-month long engagement with the Sudanese Government for his release. Hardwired worked with Congressman Trent Franks and other organizations to appeal for the release of Mr. Jasek and other Sudanese prisoners held with him."

A copy of the Bridges To Common Ground press release can be found HERE.

Congressman Trent Franks: “Today we celebrate what we hope is just the beginning of a major shift in Sudanese policy toward Christians and other minority groups there. The International Religious Freedom Caucus sent a letter to President Bashir this past December calling for the release of Petr Jasek. We are grateful to President Bashir, Ambassador Maowia Khalid, and National Congress Speaker Ibrahim Omer, for their good faith efforts in this matter.”

Congressman Tom Garrett: “This unfortunate case has unfolded for over a year and I am happy to report that within a week of our meetings with these respective countries, Mr. Jasek was released. I commend [the Czech Republic and Sudan] for working on a swift release and look forward to continuing my role in the negotiations to overturn the imprisonment of the remaining two Sudanese pastors and provide them refugee status under the J-2 visa program.”

Former Congressman Mark Siljander: “Bridges to Common Ground celebrates the pardon and release of Mr. Petr Jasek of the Czech Republic, previously sentenced to life in prison in Sudan. I commend Sudanese President Omar al Bashir’s pardon of Mr. Jasek as an expression of the new era for relations between the United States and Sudan.”

Nadine Maenza: “I am grateful for Petr Jasek's release and for all of the support he has received over the past year. This includes the local Muslim lawyers defending Petr and the other men imprisoned with him. These courageous leaders are constantly risking their lives for Christians and other vulnerable groups. It is an important reminder that religious conflict is not inevitable: peace and stability are possible when people come together to defend human dignity for all.”