The Closing of the Muslim Mind - Bridges To Common Ground

The Closing of the Muslim Mind

The great crisis that has seized the Islamic world poses the question to Muslims: “Can we enter the modern world and also retain our faith?” Underlying this question is the widely held perception, stated by Chanddra Muzaffar, considered one of Malaysia’s most respected Islamic philosophers, that “Islam and the post-Enlightenment secular West are diametrically opposed to one another. Muslims will then realize that unless they transform the secular world of the West, that vision of justice embodied in the Qur’an will never become a reality.”1 Transformation of the West is the objective; only the means of transformation are in dispute: peaceful or violent? One answer to the question above has been provided by the Islamists and Osama bin Laden. His answer is no; we cannot retain our faith in the modern world. Therefore, we must destroy modernity and reestablish the caliphate.

The answer of Islamism is grounded in a spiritual pathology based upon a theological deformation that has produced a dysfunctional culture. Therefore, the problem must be addressed at the level at which it exists. To say that the West needs to improve the economic conditions in the Middle East in order to drain the swamp of terrorism is, by itself, profoundly mistaken. Terrorists are produced by a totalitarian ideology justifying terrorism. That is its “root cause.” If someone had suggested that in order to deal with Nazism one first had to overcome the problem of poverty in Germany, they would be laughed out of school. Yet this kind of thinking is taken seriously today.

The Middle East is poor because of a dysfunctional culture based upon a deformed theology, and unless it can be reformed at that level, economic engineering or the development of constitutional political order will not succeed. If one lives in a society that ascribes everything to first causes, one is not going to look around the world and try to figure out how it works or how to improve it. “In order to function,” writes Pervez Hoodbhoy, “organized societies need modern people—people who can relate cause to effect.”2 As Fouad Ajami observed, the inability to relate cause to effect is pandemic in the Islamic world. 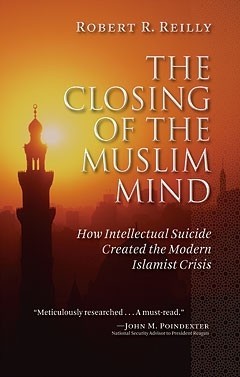 CREDIT:﻿ ﻿This essay is excerpted from Robert R. Reilly’s book ﻿﻿﻿T﻿﻿he Closing of the Muslim Mind: How Intellectual Suicide Created the Modern ﻿﻿Islamist Crisis﻿﻿﻿ and republished by permission of ISI Books.