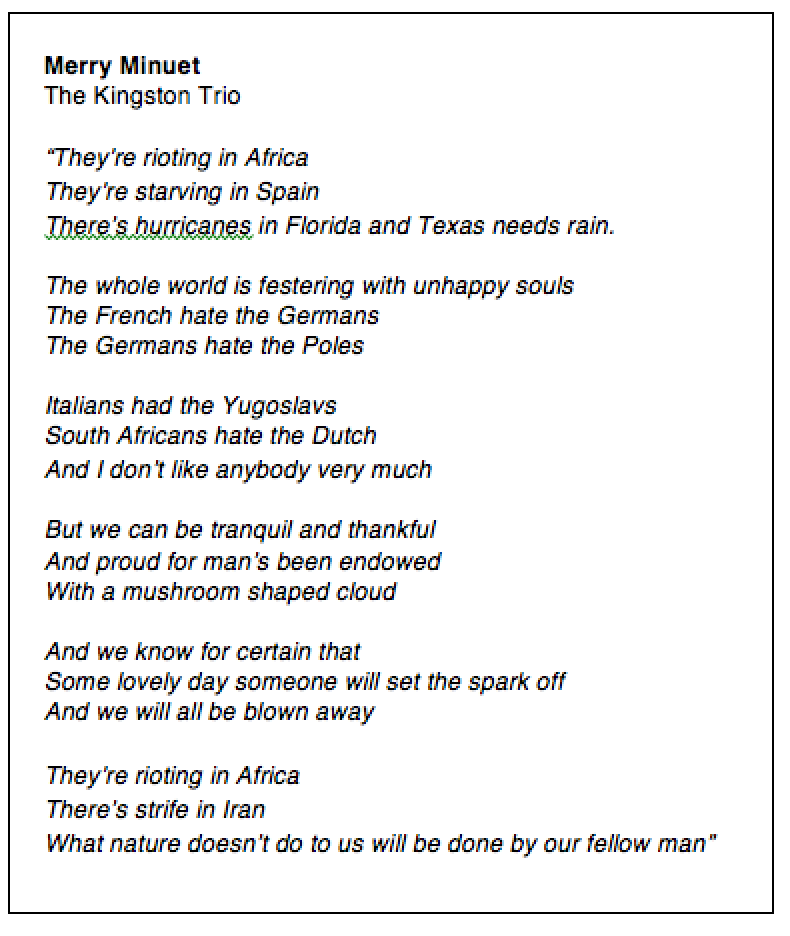 Author: David Hungerford, Chairman of the Board, Bridges to Common Ground

Merry Minuet was first sung in 1959 by the Kingston Trio as a little ‘humorous’ ditty. The best humor has a ring of truth to it, and 55 years later, somehow it doesn’t sound so funny. Is this our destiny?

It does seem to be the way in which we are heading, but does it have to be this way? The answer is a resounding “NO!” But if the world is heading in the wrong direction and the majority in this country in poll after poll seems to think it is so, we need to turn and head in another direction. That would make sense. Wrong direction, need to turn to the ‘right direction.’ But what is the right direction?

At Bridges to Common Ground we are striving to bring about reconciliation among the sons of Abraham. Judaism, Christianity and Islam all trace their roots to whom all three call “Father Abraham,” the father of Isaac and Ishmael, and in the lineage of Jesus, leading to the three monotheistic religions that comprise more than half the current population of planet earth, and among whom exist more than half the hot conflicts currently taking place. How is it possible that from this common beginning there has developed such hostility and bloody conflict?

Perhaps all this violence and mayhem should not surprise us. After all, of the first two brothers, Cain and Abel, there was bitterness and jealousy, leading Cain to kill his brother. So, strife and violence has a long history on the planet. As we have developed more and more lethal weapons we have become more and more efficient in killing, so that now we have ‘weapons of mass destruction’ and mankind has the capacity to literally destroy all life on earth.

Perhaps it is time to go back to the lessons of the Prince of Peace and listen to the antidote to the strife of our own time. “If it is possible, so far as it depends on you, live peaceably with all.” Romans 12:18 This Biblical mandate is practical in that it recognizes that ‘living at peace’ doesn’t depend solely on one individual, but that is where it must start. When WE attempt to live at peace, when we espouse living at peace, it creates an environment where peace can thrive and that attempt can be rewarded and returned by ‘the other.’

Groups on both sides of every issue are equally guilty of vilifying ‘the other.’ We see it in the public discourse all the time. However, when we vilify a whole culture, a whole way of life, we lose the opportunity to speak truth into it. At Bridges to Common Ground we suggest a 5-step plan in reconciliation, and no matter where you are in your conflicts, whether they are across the globe or across the kitchen table, you can implement this 5-step program.

Most adherents (not necessarily all the leaders) of all the Abrahamic faiths actually do want to live in peace. Yes there are those on both sides who are resistant to anything other than continued alienation, but that hasn’t gotten us very far, and if the current direction is going to be reversed, we have to start somewhere.

So there you have it. Two ‘Stops’ and three ‘Starts’. This begins with an individual effort. If multiplied it can turn into a torrent in a very short time and become a wave that can turn us around from our current course.